Its a week to Krishna Jayanthi and I thought it would be appropriate to start posting about the goodies Krishna enjoyed. There is a whole spectrum of things that he relished. To name a few: Avil (Poha or Beaten Rice), Butter, Milk, Yogurt, everything in the Murukku family, and sweets. I decided to post on each of these dishes for the rest of the week and kind of build up to the birthday bash. Before I go into the recipe on Avil Kesari, I would like to post on little stories around the ingredients used. 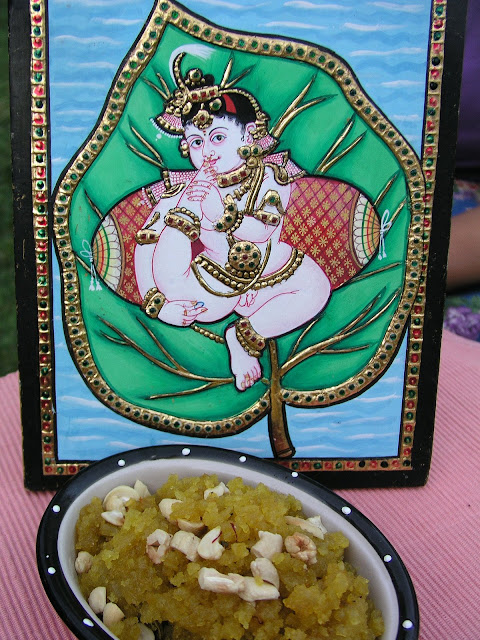 As the story goes, Krishna’s best friend was Kuchela. Socially, Kuchela was a very poor Brahmin while Krishna was a royal prince. They attended the same gurukula (school) as boys and went their ways in life. Krishna became the king of Dwaraka while Kuchela remained a poor Brahmin who married and had 27 children. They were in such great poverty with hardly any food to feed the children. One day Kuchela’s wife suggested that he seek the help of Krishna, his true friend. At first Kuchela was reluctant because he feared that Krishna might not see him because he was poor and secondly, he did not have anything to offer as a gift. His wife knowing that Krishna loved Avil, prepared a fist or two full of the beaten rice which Kuchela carried in his upper cloth.

On reaching Dwaraka, Kuchela very anxiously approached Krishna’s Palace. Krishna seeing Kuchela rushed to hug and welcome his friend. At the palace Krishna treated Kuchela with such love and respect and spend a lot of time with him. In conversations with Krishna, Kuchela did not mention the real reason for his visit. But, soon Krishna enquired about his friend's family and their well-being and asked what his sister-in-law (Kuchela’s wife) had specially sent for him. Kuchela offered the Avil to Krishna who took a fistfull of it and ate with profound joy. Rukmini Devi, Krishna’s wife stopped him from taking the second fist as she wanted her share of the Avil from the devoted wife of Kuchela.

Kuchela with great disappointment left Dwaraka as Krishna had not offered him anything in return in the form of wealth. He was so troubled and sad with the thoughts of his hungry children and anxious wife who were waiting for some help from Krishna. He was so immersed with these thoughts that he walked past his own hut. His wife noticed that her husband had walked past the hut, called out to him and explained to him, the kindness of Krishna and how their old hut became a beautiful mansion and because of the Avil that Krishna ate an abundance of wealth was showered on them. 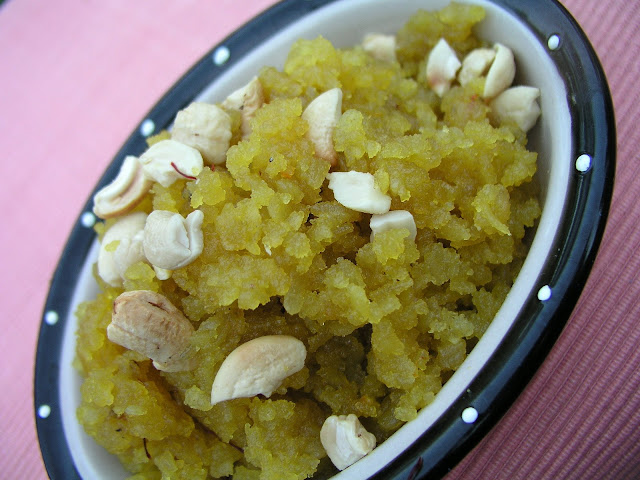 NOTE: Avil does not expand in quantity in this recipe like Rava or semolina.
Sugar- 4 cups 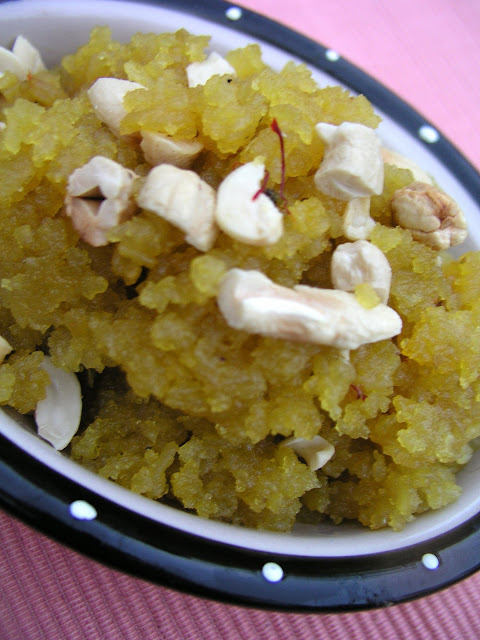 1. Take 5 cups of Avil and wash it to remove all dirt from surface.


2. Drain the excess water using the colander( the awesome one from IKEA a must have in the kitchen) and set aside.

3. Heat the pan and add butter and allow it to turn to ghee (brown butter). Add cashews and roast them.Add the Avil and mix well for 5 minutes.


5. Allow it to cook for 5 minutes and serve it hot. Tastes great with puri.