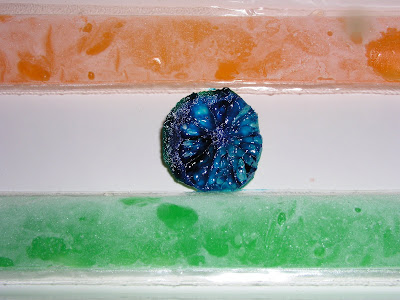 Today is Independence day, the day India said goodbye to the Englishmen. The English left behind their influence on India in several aspects of Indian culture example in language, sports, transport and so on. Cooking is no different. English introduced cakes, tea and vegetables such as cauliflower into Indian Cooking.

As an Indian living in America, I wanted to celebrate the Indian independence with an American Classic, the Popsicle. In this picture, I have used orange and green Popsicles on a white plate to represent the Indian tricolor. For the Ashok Chakra, I have used a slice of lime dipped in blue food coloring. Happy Independence Day Everyone!