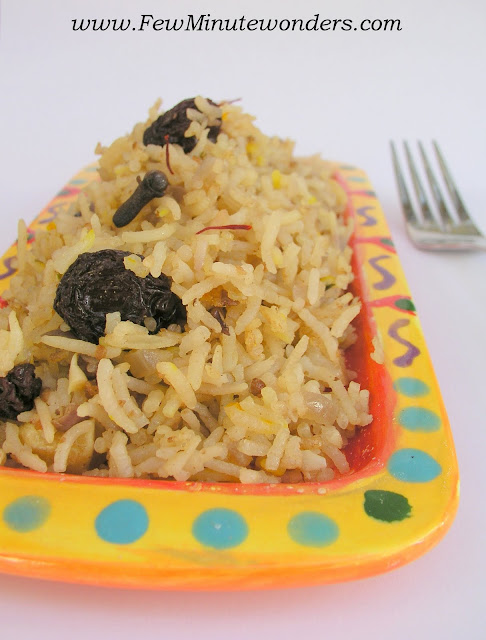 Saffron is an elegant, sophisticated and colorful spice. Though only a few strands are added to the preparation of delicious dishes, its flavors are so rich that it makes the end product exquisite and aromatic. A saffron flower looks as colorful as the saffron itself. The red stigma that you find in the flower is the saffron that we use. This red stigma when added to dishes makes it pleasantly yellow and this yellow cannot be duplicated by any food coloring available in the market. The name saffron is derived from the Arabic word za'farān, (asfar meaning yellow). In Tamil it is called Kumkuma Poo. Kumkum is very red and since the stigma resembled the color I believe it could be named Kumkuma Poo (Poo meaning flower).

Apart from the flavors it has a lot of medicinal uses and therefore added in the preparation of food. In general, saffron rice is very popular in Persian cuisine. In India they are mostly added to desserts. Often there is a lot of talk  regarding Indian food. Most non- Indians who taste the food feel that we do not allow the taste of any ingredient to come through because of the use of a lot of spices. It was mentioned again in the Iron chef America show where an Indian Chef went against a Japanese Iron Chef in the Leeks Battle. Though she had many creative dishes she lost the battle because the true flavor and taste of leeks was not delivered.

The recipe below is my attempt on creating saffron rice where I did not add any pepper or chillies to create spice, but rather wanted to focus on the saffron and try to bring out its flavor in the rice. It does has the kind of spice that create warmth to the body through the use of cloves,ginger and cinnamon. This is such a perfect rice to be served along with some spicy side dish or any thing of your choice. I am so pleased with this recipe because it was reproduce able. The rice was not yellow like most saffron rices, but rather pale yellow in color with specks of yellow here and there. I liked it so much that I decided not to make it too often because I want to treat this one very special. 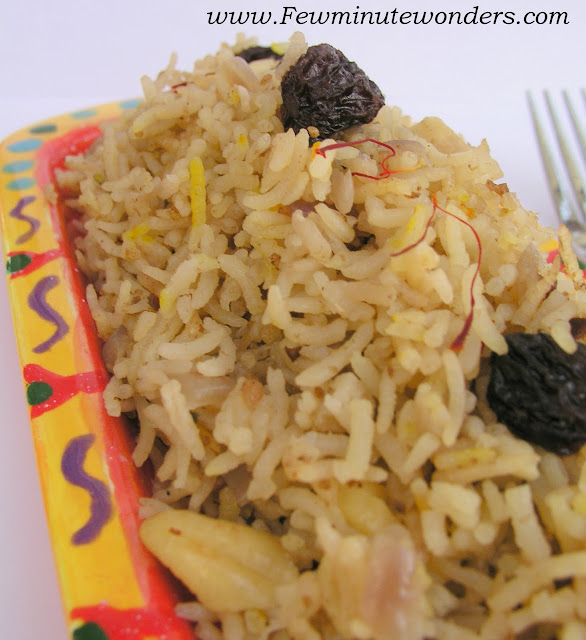 1. 1. Wash the rice 3 times or until the water is clear and soak the rice for 30 minutes.
2. Warm the saffron along with warm milk. Allow it to soak.
3. In the heavy bottom pan add oil and butter. When it melts and warms up, add the nuts and raisins. Allow the nuts to turn golden and the raisins to plump up. Remove and place in a plate.
4. Add bay leaf, clove and cinnamon and allow the oil and the spices to mix for 10 seconds.
5.Add onions and allow it to cook a little before adding the garlic and ginger and cook on low until they turn pale and look cooked.
6. Add the water and allow it to boil before adding the rice. Add salt and  check the taste and allow the water to reduce. Reduce the heat to low, cover and cook for 3 minutes.
7.Take the saffron that is soaked in milk and using your fore finger and thumb rub to get the yellow color. Mix the color back into the milk.
8.Pour this milk over the rice and mix gently. Check to see if the rice requires more water. If it needs to cook more add 1/4 cup, cover and cook.

(Note: Sometimes when the type of rice used is old rice it will consume more water and is a good brand of rice. This will be known only when the rice is cooked. Hence the addition of water)